When you hear the name New York City, you think of a huge metropolis that doesn’t allow for much construction on its premises. But that is definitely not the case – lately, metropolitan areas have seen a surge in construction investment.

Last year Forbes magazine reported that, among them, New York City was the city with the largest number of new construction projects for the second consecutive year. The magazine reported that a year ago, the city saw some $8.5 billion invested in new construction starts, which was a 16% increase compared to the same period in 2012. The investments were mostly in new residential towers, needed to meet the ever-growing housing demand. However, in the surrounding suburbs, but also throughout the metro area, there was a surge of mixed-use developments that only add color to the diverse look of this fantastic city.

Let’s take a look at 5 of the most interesting ones. 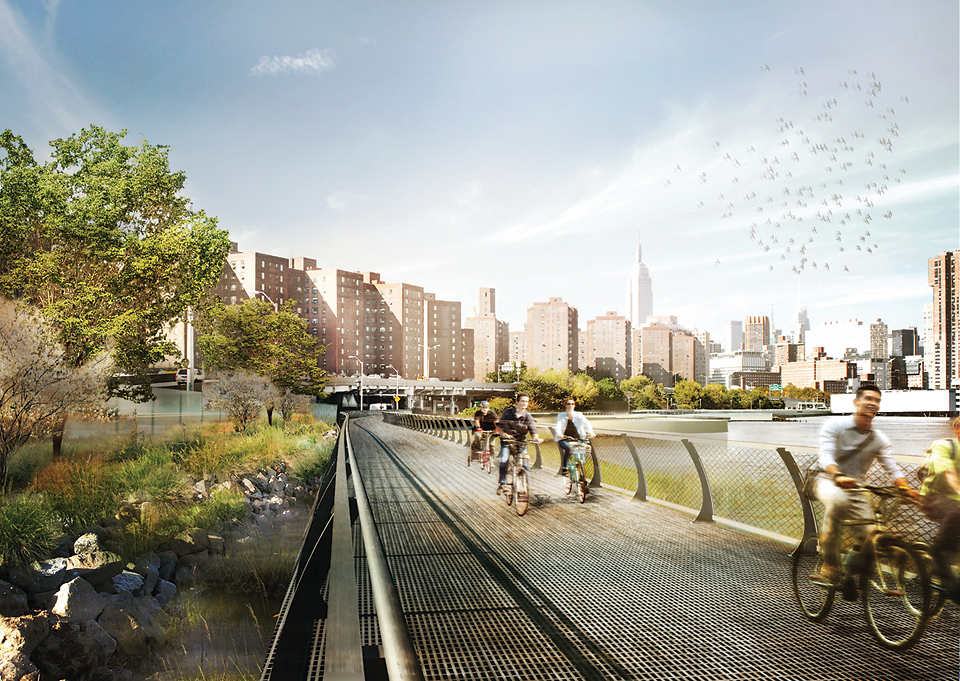 The western banks of East River aren’t exactly the most aesthetically pleasing place in New York City right now. Neither are they the most accessible. But efforts to change how the citizens of New York perceive the waterfront are already underway. The East River Blueway is an ambitious project, developed by the architects of WXY Studio + Urban Design and aiming to entirely reconstruct parts of a stretch between the Brooklyn Bridge and East 38th Street. The project has been granted $8 million in public funds. Among its most impressive ideas is the construction of Brooklyn Bridge Beach. The idea is to have an actual beach where New Yorkers can sunbathe, canoe and kayak.

Last year, the Culture Shed received a lot of attention when it was allocated $50 million from the city’s budget, an impressive grant which sparked some controversy. For one thing, some people thought that was too much money when the city has more pressing needs. What made others raise eyebrows was that the Chairman of Culture Shed and the CEO of Bloomberg LP are one and the same person. Yet the Culture Shed, located in the Hudson Yards district, promises to be a convenient arts facility (Fashion Week will be held there from now on) where people from various fields can find enough space for artistic expression and where non-profit organizations enjoy lower rates.

Construction of the Atelier II, an enormous mega-development in Manhattan, which might turn out to be the city’s largest apartment tower, actually began in 2005. Due to the economic recession it was harder to find funding, so construction was halted until last year when work was once again restarted. To get a better idea of the projects, here are some stats: the project is estimated to cost close to $295 million, the buildings will be 656 ft tall and will host a total of 1,191 apartments. That makes the Atelier II larger even than the Silver Towers, and it’s likely to obscure some of their views.

Tower B2 is part of the Brooklyn’s Atlantic Yards, a project consisting of 16 high-rise buildings, intended for both residential and commercial purposes. Tower B2 will be a residential-only building that is bound to set a record for being the highest modular building. Modular units are said to be a more sustainable way of construction that has already gained popularity in Europe, but are yet to be embraced by Americans. The construction project is impressive for at least one more reason: half of its 363 units will boast prices that qualify as “affordable housing”. Tower B2 broke ground last December, and is expected to welcome its first occupants in the last quarter of 2014. Construction cost is estimated to be around $117 million.

West 57 (not the final name) is a large pyramid-shaped apartment building, designed by renowned Danish architect Bjarke Ingels and executed by the Bjarke Ingels Group (BIG) in 625 West 57th Street in Manhattan. After some negotiations with the City Council, the company agreed on providing 173 affordable housing units out of the total 750. The project, estimated to cost around $225 million, will try to attract funds with the help of the EB-5 visa program. According to the rules of EB-5, foreigners who invest in U.S. projects or businesses, can be granted a permanent residence.

How to Get Bonded For Construction Projects