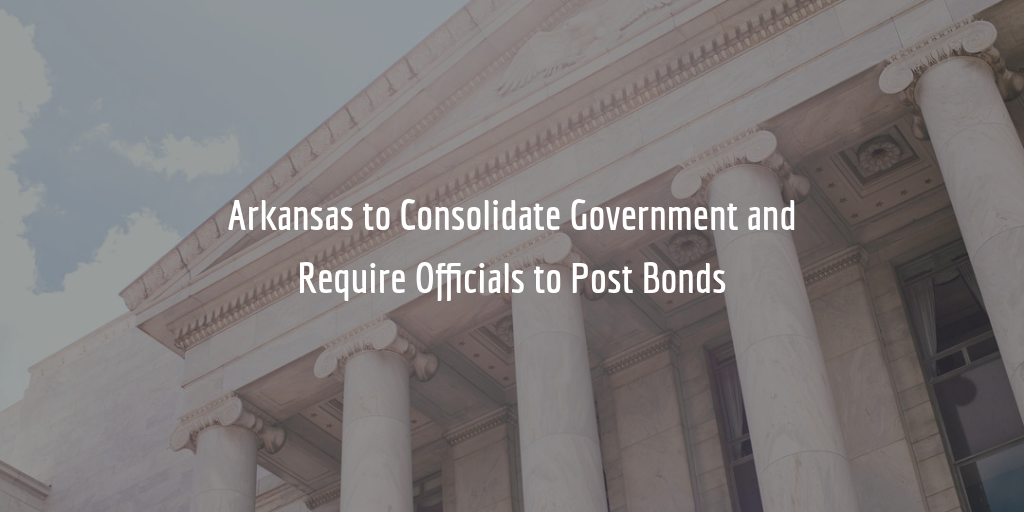 On April 8 the Arkansas Senate approved the enactment of House Bill 1763. The so-called “monster bill” reorganizes the whole state government of Arkansas, and reduces the number of state departments.

The purpose of the bill is to achieve greater efficiency in the workings of the state administration, as well as savings. To achieve such efficiency, the bill introduces requirements for public official surety bonds on some government levels and eliminates them on others.

Read about the bill and its various introductions below!

House Bill 1763, which is now officially Act 910, was approved in early April and will become effective as of July 1, 2019. With its 2,047 pages, the bill is one of the most ambitious to date that seeks to transform how the Arkansas government will function. According to Senator Bart Hester, it’s been 50 years since anything like this has been attempted in the state.

The Act is a combination of 16 bills, and its central aim is to consolidate the state government by scaling down the number of agencies that report to the governor. After the Act’s implementation, the government will see a reduction of the now 42 state departments to a total of 15 cabinet-level agencies.

This will be achieved through a consolidation of the existing agencies and the appointment of a cabinet secretary to lead each of the newly founded ones. According to lawmakers, the government will see at least $15 million in annual savings as a result.

After the completion of the process, the new government agency classification will include the following entities, with a secretary leading them:

Start your surety bond application today! Why us?
APPLY NOW

To guarantee the faithful performance of cabinet secretaries’ duties, the Act requires every one of them to post а $10,000 surety bond. The Act directs secretaries to post the bond with the Secretary of State.

Why do Arkansas cabinet secretaries require a bond?

Cabinet secretaries who will need to post a $10,000 bond may be unfamiliar with how bonds work. Public official surety bonds are agreements between:

If a secretary is found to be in violation of these conditions, a claim can be filed against their bond by the SoS. In such a situation, the surety that backs the bond may extend compensation to cover the claim up to the full amount of the bonded. Ultimately, though, it is the bonded secretary who is liable and must cover the costs of the claim.

What’s the cost of the bond?

The bond amount of $10,000 is not the same as the cost of getting bonded. The cost, or premium, of your bond, is a fraction of the full amount and is determined by your credit score. The higher your score, the cheaper it will be for you to get bonded.

You can request a free and exact quote on your bond by completing our simple bond application form. There are no obligations attached to getting your quote. We will contact you with your quote and more information about the bond as soon as we receive the completed form.

Ready to apply? Then simply get a free no-obligations quote, so you can see our low prices!
OK. I want a FREE Quote!